CLEM SUNTER, INFORMATION AND ARTICLES FROM THE WEB

Back: Articles and information on Clem Sunter

For ten years I have been doing ‘state of the nation’ breakfast presentations with Justice Malala in Johannesburg and Cape Town. We do them twice a year in each city.

I would like to put my latest observations on South Africa’s future, which I shared with audiences last week, in the context of the ‘High Road/Low Road’ chart shown below. It was produced by the Anglo American scenario team in 1986. 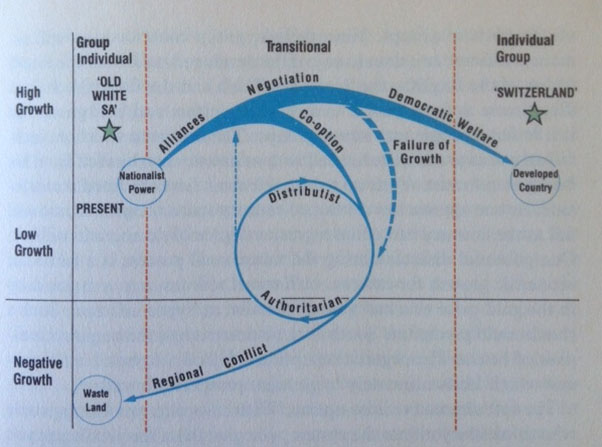 In retrospect, South Africa managed to take the High Road of negotiation in 1990 with the release of Nelson Mandela, and with the subsequent adoption of a new constitution which led to the general election in 1994. In the ensuing years of Nelson Mandela and Thabo Mbeki as leaders of the country, we continued along the same path at the top of the chart with fairly high economic growth rates.

However, more recently, our economy has not performed for all the reasons we know about. We have followed the dotted line of descent entitled ‘Failure of Growth’ and have moved to the left with deep divisions among competing groups once again dominating our society.

We are now approaching the very critical crossroads shown in the lower section of the chart. We either get out of trouble with strong leadership bordering on ‘authoritarian’ to revive the economy and promote unity of purpose; or we descend even further into outright conflict and possibly a ‘Waste Land’ devastated by civil war. It is as simple as that.

Thus, Cyril Ramaphosa’s ascent to the presidency comes at a tipping point in the nation’s destiny. If he shows the positive qualities which I know he has from frequent meetings with him when he was the leader of the NUM, we have a chance of moving back once more to the High Road trajectory. If he is overwhelmed by internal divisions inside his own party, or by outside forces which render him powerless, the Low Road beckons with an extreme ending not to be dismissed.

There are six flags to watch. The first is around corruption: will past perpetrators be pursued to ensure justice is seen to be done and will it be eliminated in future? Such has been the level of corruption that South Africa is now in danger of running out of money in addition to receiving junk status.

The second flag is around improving the quality of our education system, health care and general infrastructure. No economy can grow fast without all three. The management of state owned enterprises has to be transformed for the better.

The third flag is around style of leadership because winning nations are like winning soccer teams. People must feel they are on the same side even though they have differences of opinion. Nobody must feel excluded.

The fourth flag is about pockets of excellence. South Africa has many and we should be replicating them instead of dumbing them down. Like soccer stars are essential to win championships, pockets of excellence ensure that a nation remains in the premier league of the global economy.

The fifth flag which to me is the most important one of all is whether we open up our economy to achieve genuine economic freedom for all. We need an effective platform for the next generation of young entrepreneurs to launch themselves everywhere in the country. They are the ones who will be providing the millions of jobs required to get our unemployment rate down to single figures.

The sixth and last flag is the one which in a worst case scenario can ignite a civil war and that is land reform. Reform has to happen but it must happen in a way that encourages enough goodwill on all sides to rule any form of conflict out.

So what are the probabilities for the different paths represented on the chart? With the possibility of a new dawn arising from the new leadership, a return to the High Road with an economic growth rate of 5% per annum has increased to a 60% probability. The scenario of being stuck on the Low Road, depicted by the circle of economic stagnation in the middle of the chart and representing distribution without growth, is now assigned a 30% probability. That leaves a 10% probability of the wheels coming off altogether as we descend into the chaos of a failed state.

Watch the flags. They must turn green for a positive outcome. Otherwise prepare for the worst.

Back: Articles and information on Clem Sunter